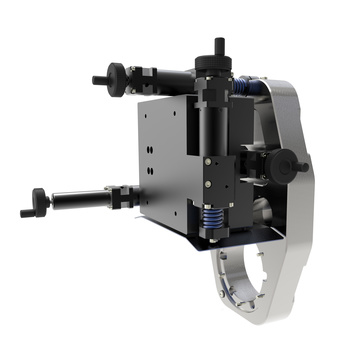 In a test stand, the shaft of a compressor unit had to be aligned in two directions perpendicular to the drive shaft and in two rotations perpendicular to the drive position. Considerable compression forces of up to 700 N were to be expected on the adjustment system. It combined an XY readjustment system composed of plates with a swivel unit. The swivel unit is composed of a central flexure hinge which absorbs the compression forces. The XY unit is mounted with profile rails that have a correspondingly sturdy design. All four readjustment directions are actuated with strongly pre-stressed lead screws, which are operated via a gear unit with a transmission ratio of 1:100  with hand wheels. The adjustment system can also be subsequently motorized by simply replacing the hand wheels with stepper motors.