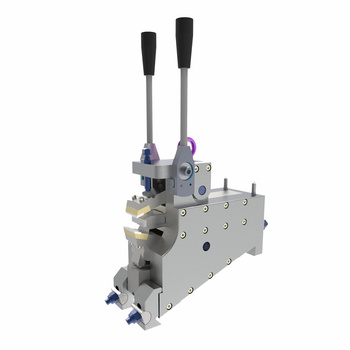 Highest rigidity due to continuous parts

When grinding our threaded spindles, so-called steady rests are used. These are holders which clamp the prefabricated thread bar with high rigidity on the outer diameter at a defined height and thus enable the thread path to be ground with high precision. Continuous parts transfer the force directly into the machine - thus guaranteeing maximum rigidity. A large number of these steady rests are used in production at our head office August Steinmeyer GmbH & Co.KG in Albstadt.

An examination of the previously used steady rest manufactured by another supplier showed that a unit assembled from many screwed-together parts could not achieve maximum rigidity under practical conditions. Over several development steps, each of which was followed by a test phase, the design underwent several further simplifications. Starting from a stacked architecture, the structure was transformed into an architecture consisting of two continuous, vertical plates. These continuous plates now guarantee the desired maximum rigidity through the chain of a minimum number of consecutive parts.