2004 | In a telescope for astronomy, for example, the combination of DC micromotor, encoder and low-backlash planetary gears enables precise positioning of optical assemblies.

In 2004, the world's most powerful single telescope will go into operation on Mount Graham in the U.S. state of Arizona (Fig. 1). Astronomers intend to use it primarily to focus on distant Milky Way systems, young binary stars and newborn suns.In principle, this "Large Binocular Telescope" ( LBT), which weighs over 600 t at a height of more than 20 m, is an oversized field telescope. Its two mirrors each have a diameter of 8.4 m and together form a light collection basin of about 100 m2. This means that they can also collect the radiation of faint objects at the edge of the observed universe. The interaction of the two mirrors mounted at a distance of 14.4 m gives the telescope a resolving power that would correspond to that of binoculars with a diameter of 23 m. Each mirror resembles an oversized mirror. Each mirror resembles an oversized honeycomb made of borosilicate glass and weighs 15.6 tons.

Interference as the key to high image sharpness

The design of the telescope and the optical systems integrated into it guarantees scientists a high degree of flexibility in their observations (Fig. 2). They can observe the same object independently with each of the mirrors, but also study different objects by slightly tilting the visual axes, or take a look at the same object with both mirrors at the highest resolution.
They are helped in this by a physical trick: to achieve the unusually high image sharpness, the light rays reflected by each individual mirror are superimposed, i.e. caused to interfere. This makes the resolution almost ten times better than with conventional single telescopes. A prerequisite for the LBT to function smoothly, however, is that the individual components manufactured in the three partner countries of the USA, Italy and Germany work together smoothly and function trouble-free even under the difficult conditions at the site of operation. After all, Mount Graham is about 3300 m high. The climate at this altitude is characterized by sub-zero temperatures, high humidity of up to 90 percent, and sometimes extreme temperature fluctuations.

If a high-resolution image is to be produced by interference formation, the optical assemblies attached to the two mirrors, which focus the reflected light and bring it to superimposition, must be positioned with an accuracy of 5 µm. For this purpose, the company Feinmess, Dresden, developed a three-axis positioning system (Fig. 3) that brings the corresponding optics into the correct position on the two mirrors of the LBT. For this purpose, distances of up to 200 mm have to be overcome in the horizontal direction (longitudinal positioning) and distances of up to 50 mm in the vertical direction for focusing.

At the same time, the optical assembly must be rotated up to an angle of 36°. To ensure the required positioning accuracy, the system must operate with as little backlash as possible. The drives on the axes are therefore of particular importance, and Faulhaber drives were chosen. The classic bell-type armature motor with ironless rotor coil offers very favorable conditions for such applications. The small DC drives work reliably even under adverse ambient conditions. They can withstand ambient temperatures between - 30 and + 125 °C and, if designed accordingly, are not affected by high humidity (up to 98 percent).
Another important basic idea for the motor selection was the immediate and high-torque start-up of the DC motor after a voltage is applied. Immediate response to control signals is thus ensured. The self-supporting copper coil also enables a very light motor design with a high efficiency of up to 80 percent. The motors used on all three axes of the positioning system are just 42 mm long with a diameter of 26 mm; at speeds up to 6000 rpm, they deliver an output power of 23.2 W.

In the application described, the motors were combined with two-stage planetary gear units that operate with a reduction ratio of 16 : 1. They are flange-mounted on the motor at the front and impress not only with their compact design, but also with their quiet running and long service life. The gear backlash has been optimized for use on the positioning system. Instead of the usual values of around 1 ° for standard gear units, these planetary gear units operate with a backlash of only 12 angular minutes, measured at the output shaft.
For precise positioning, it is imperative to know the actual position of the motors. In the positioning systems used at the LBT, it is detected at each motor with an optical encoder that delivers 500 pulses per mrotation. Using a metal disk diaphragm, two 90-degree phase-shifted usput signals are generated in the transmitted light process. The Jndex pulse is nchronized with the u -gang B s . There are inverted complementary signals for each of the three channels. The pulse generator is attached to the free end of the motor shaft and fixed with three screws. The supply voltage for the pulse encoder and the DC-Micromotor as well as the output signals are fed via a ribbon cable and a ten-pin connector. Since the complete drive units, consisting of motor, gearhead and pulse encoder, are very compact, they can be easily integrated into the three-axis positioning systems. Miniaturized drive technology thus makes a considerable contribution to the LBT's ability to open up a new dimension in astronomical research. 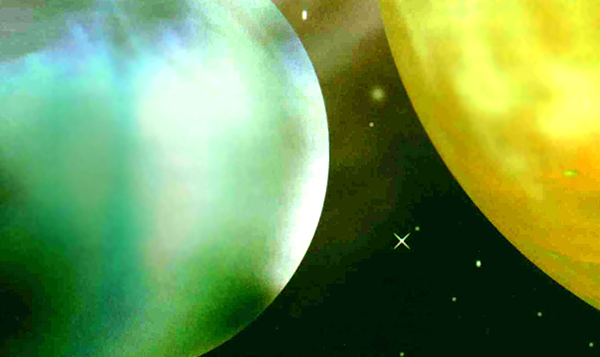